As I mentioned earlier, we planned to run the Get Lucky 7K  for our 3 year anniversary.

Friday night we picked up our race packets, and I made The Fiancee do the routine photo to ensure we documents every second of our first 7k.  Picking up the packet was also a huge reality check that in roughly 15 hours I would be running a 7k. You know me, I always plan races before I actually start training in hopes that I will train, and then I don’t do any run training… boat I was sitting in again Friday night. 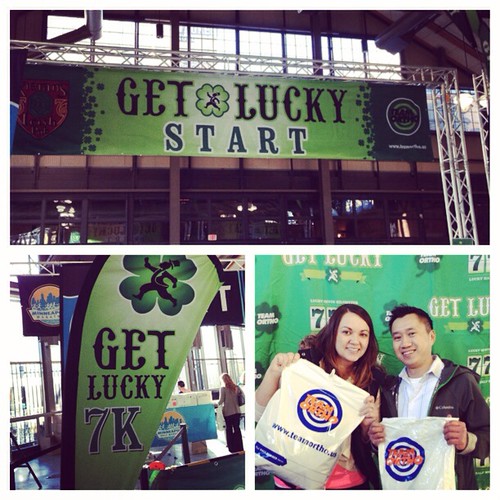 I mentioned to my Beachbody coach the other day that ” I was going to die,” {I do have a flare for the dramatics} doing this 7K because I hadn’t trained at all for it. She reminded me that I had been doing the 21 Day Fix for 21 days at this point, and I would be surprised how much that would improve my ability to run this 7K.  Now that didn’t seem to fit, none of my workouts involved running, how would that help me run better? I went with it- wanted to keep positive.

Race day, The Fiancee and I didn’t really plan out what we were going to wear in advance like many of the other racers. We sure did see a lot of tutus, wigs, and one green body suit. So morning of we improvised with everything GREEN (& warm) we could find. Check us out! 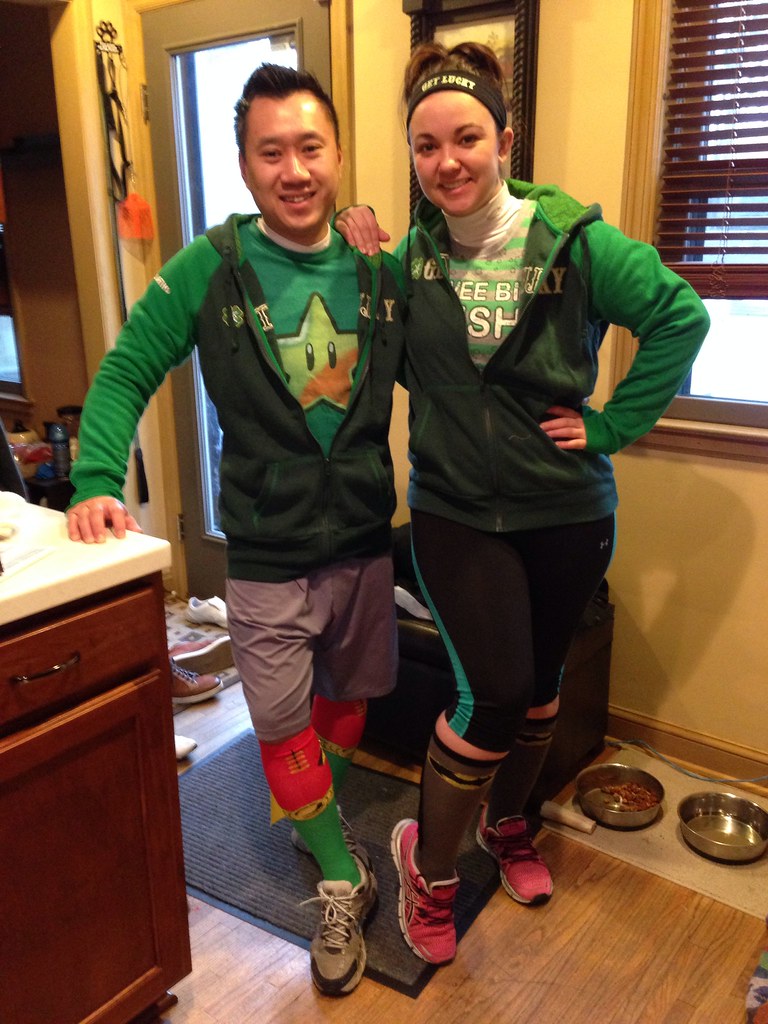 We decided to park farther away and walk the 1/2 mile to the start line. Now on a typical day this would be a great walk, but instead of the 40-50 degree days we had been having all week, it was a freezing 19 degrees at 8am Saturday morning.  We also didn’t want to bring anything to check, so we braved the walk in the clothes we are pictured in above. Dang, it was cold out!  The forecast really did not give hope for race time either, 21 degrees…

While waiting for the race to begin, we sat in the warming area, and I made The Fiancee take more photos with me 🙂

Like our socks?  Our friend Ryan, bought them for us to play football in because my nickname is Batman, and The Fiancees is Robin {long story, maybe for another day}.  The socks even have little capes on the back! I totally think they helped me run faster 😉 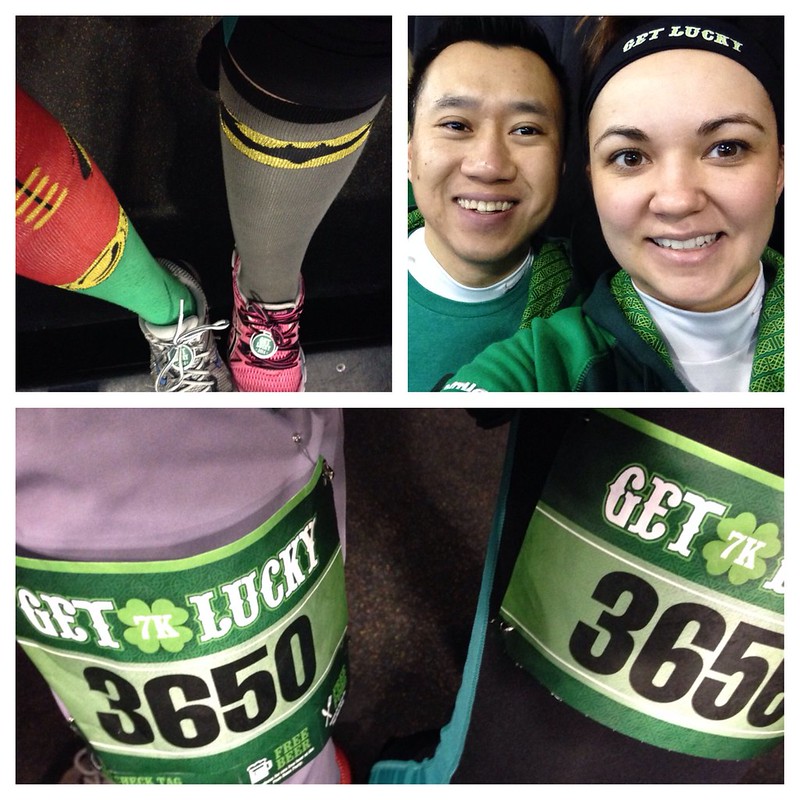 Now lets talk about the run. I was excited, and nervous waiting there with 12,000 other runners.  I had loads of energy prior to the race, and felt pumped, but wasn’t sure it could carry me through the whole race.  The race started and I was off running. The best part of the whole thing, even though The Fiancee is a strong runner, and could have been way ahead of me even in the first minute, he stuck by my side.  Until the 3K marker, he kept pace with me.  I think the combination of him running with me, and encouraging me every few minutes, I was able to make it to the 3K marker without walking at all.  I was feeling really proud of myself at this point, knowing I had never run a whole mile without stopping in my LIFE!

From the 3K marker to the 4K marker I did walk, to give myself a little breather. The only other break I took was  up a large hill in the middle of the 5thK and the 6thK.  The last K was the toughest, not only because I was tiring out, but because the roads were half iced over. Remember I said it was 20 degrees outside… 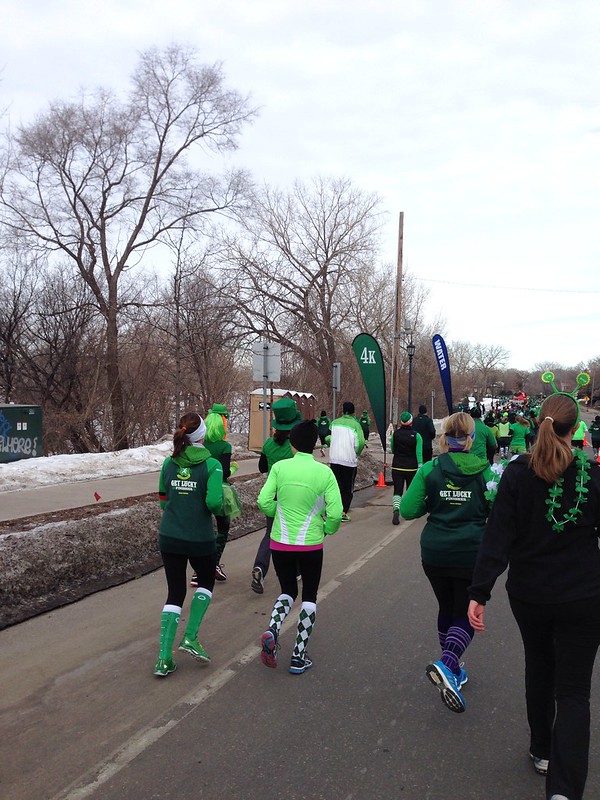 In a little under a hour, at 54 minutes, I finished a head of my goal! It was such a great run, and I felt so good crossing that finish line.  I will have to give it to my coach, Lois, she did say the workouts I had been doing would help me out, and they sure did! I feel like I was able to breath better, something I normally struggle with, and I had more endurance than I have had in a long time. After the run, we both agreed that it was the best anniversary activity.  Again, focusing our life around our health and fitness!   It was so great getting up early, dressing up, and being done with such a great workout by 10am. Post run, we gobbled up the fruit and water they gave us, and headed to the “After Party.”  Free beers in hand we relaxed post-race, before heading to lunch.  We had lunch at one of our favorite spots, Smack Shack  for a Shrimp Po’boy and Connecticut Style Lobster Roll. We always order these two sandwiches and split. They are just so delicious!

Please note the fries where for The Fiancee, and I only stole 5 or 6. The sandwich already put me at a max for the day with my eating plan.  I did “treat” myself a little after such a great run, but tried to stay good. 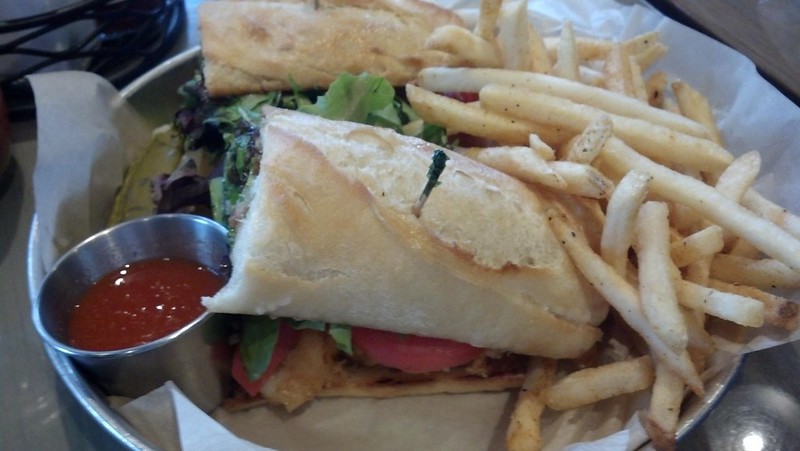 After all of our morning activity, we went home for a shower and a nice nap.  We relaxed the rest of the day at home with shows we had on DVR, and had some good quite alone time together, totally not something we normally have time for on the weekend. Has anyone watched Master Piece Classics, Sherlock Holmes? If not, it is a MUST! We are nerds, we love a good murder mystery show!  We watched the whole 3rd season Saturday night.

Sunday was not notable at all, we spent the day cleaning our house. Oh the joys of being an adult…

Well that was our weekend, I would love to hear how yours was??